International representation that a city-state has is something unique. The presence of this city can be seen in international organizations and it can have special symbols as anthems, flags and and own currency.

Microstates are special, and for many purposes, they are attractive for visitors and investment, but we must distinguish between small states in a territory (which have a capital) of states that are completely urban cities themselves, such as Monaco, the so-called  Vatican City or Singapore.

Regarding this one we will analyze what its Urban Brand is, not only as a sovereign nation, but as a city trying to play its role as a reference in Southeast Asia as the  window of the World.

The City Branding of this capital is very good because it helped to achieve business excellence, with good working conditions and cutting-edge technology. It is considered a cosmopolitan and multicultural city as it welcomes and encourages immigration from around the world, which is reflected in a multicultural basis: Chinese, Indians and Malays with their respective languages, religions and cultural lifestyles, an Asian melting pot that makes it exclusive. 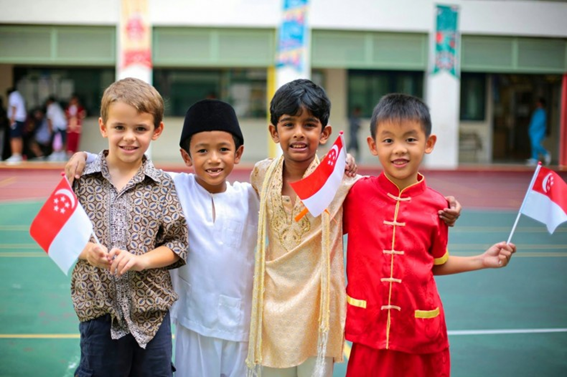 The official languages in Singapore are English, Malay, Tamil and Chinese

Singapore is, as a microstate, one of the largest exporters and importers in the world and it has a high per capita income. Besides being, thanks to its geographical location, a necessary transit for international transport that has made attract businesses worldwide, skilled labor, and as microstate or pseudo-tax haven, their low tax rates have attracted even more foreign capital not only Western but also Chinese and Indian, which are the emerging megaeconomies. These factors qualify it as AAA by agencies such as Standard & Poor’s, Moody’s and Fitch, that although their –deliberated- measurements made  fall down  large economies of the old continent they have boosted the foreign investment in this country.

Currently Singapore is celebrating its 50th anniversary of Independence, and the city is desguised with the little red dot: SG50. 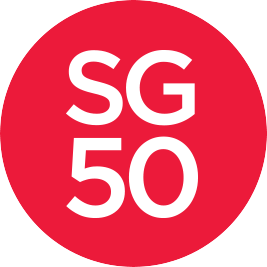 Official SG50 logo for the 50 Anniversary of Independence

This dot represents their home and the logo shows how the Singaporean spirit is, noting that their dreams are not limited to a physical space of their island nation.

Also specified in its corporate identity manual the more colorful logo SG50 has to be applied with dignity and respect in accordance with the laws of Singapore. It can be customized freely but it can not be used for attacks against other people, causing violence or misunderstandings against political and religious interests. It can not have a misuse and this is the positive SG50 logo simplicity, which includes and does not exclude: “less is more”. 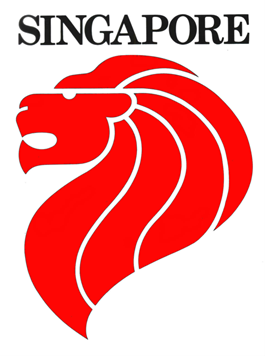 All this is not new. To understand how Singapore came to have the visibility and the current brand image, we must resume its starting point in 1986, when the city-state introduced the lion’s head as a national symbol.

In the thirteenth century the prince of Palembang, Sang Nila Utama, sank to an island and in that moment was when he saw a creature shaped like a lion, so he called this island “Singa Pura” which in Malay means Lion City and from this word it derives, naturally, the current name of Singapore.

The lion head symbolizes courage, strength, excellence and tenacity in the face of the challenges. The five strands of the lion’s mane also represent the ideals that surround the five-star national flag that are democracy, peace, progress, justice and equality

The lion logo was chosen because it includes all the features of the city, and its use, not as a shield, has served to communicate the values of Singapore in a less formal way in any event, promotion, speech, etc.

Having been an island and having got its own government has provided facilities for growing its own urban identity and City Branding. Their biggest rivals, which are other megacities of this Asian region, Tokyo, Shanghai or Hong Kong, have never had that state sovereignty to promote their brands and that were related more to the Japanese and Chinese governments, despite their autonomy .

Major world representatives, including former leader of the UN, Professor Kishore Mahbubani, spoke of these global assets that made Singapore a unique urban offer:

Despite these positive factors, Singapore has to adapt to the times and create an easily understandable brand, implying that it is a friendly city that suits all profiles and it is trendy. A postmodern destination that the Singapore Tourism Broad (STB) knew capitalize with “Your Singapore“, a very open and youthful campaign.

Touristic promotion of Your Singapore

The logo of the STB is still present today and it coexists with the SG50, promoting the city as a destination, although the tourism broad presents itself as a unique brand for visitors and the anniversary of independence, however despite of having a limited duration in time,  it integrates a complete city branding campaign, with internal communication for Singaporean citizens and external communication for foreigners to enjoy traveling and visiting Singapore.

And obviously the activities of the global agenda of this city are vibrant. It embraces a wide audience thanks to the media coverage of the Formula One in Singapore, attracting millions of looks, but more recently hosting the BNP Paribas WTA Finals, the final of the world women’s tennis, in a commercial and sporting activity that also promotes women’s sport and healthier life values.

Maybe this way to promote the sport of women helps to silence criticism of the use of women’s image in the Singapore Airlines, which is the company that represents the dynamism of this city-state, as “friendly” with the stewardesses smiling, and so well connected globally by its exact location between Asia and the Pacific.

Today Singapore could not be understood  without the destinations of this airline, which is the reason why there is a direct relation between an urban identity and Singapore flights. The airline company ads are an open door to the Town of Red Lion.

But Singapore also has a pending subjet with the environment, as happens to many Asian cities.

A study by the National University of Singapore (NUS) that ranked Singapore as the worst environmental place among 179 countries has brought a strong response from the city government. This study detected the disastrous consequences that the urban development  had in the natural environment over the past 30 years.

Professor Navjot Sodhi, from Biological Sciences NUS Department, and co-author of the study said that the rapid development of Singapore in the last 30 years had lost 90% of its forests, 67% of birds, about 40% of mammals and 5% of amphibians and reptiles.

And it is not the first time that Singapore fails in environmental issues. It has been frequently cited as having one of the highest carbon emissions per capita worldwide by the Energy Information Administration (EIA).

We must add to this the problem of density and lack of space on an island with a finite extension. Singapore has developed and it has plans to expand geographically gaining ground in their national waters, but has already had its first diplomatic row with Malaysia. The question is that any intent to harm the seas, even in urban environments, has a clear negative impact and whether in or out of a national domain it must always be denounced.

In red extension of Singapur gained from the sea

Singapore is a large city, populated, dynamic, but with a limited growth and is why it has to create an added value in its urban brand. All services, creations and spaces of this city-state should have those transverse values that have earned it a unique worldwide reputation.

To improve the environment and the uses of its spaces for everybody are the challenges that this lion will have for the next 50 years.